Saint Patrick’s Day is a holiday (mainly in Ireland) celebrated on March 17th, the date when Saint Patrick died. It was originally a Christian feast in the 17th century. Nowadays the celebration involves public parades and festivals. It is also celebrated in the United Kingdom, Canada, the United States, Brazil, Argentina, Australia and New Zealand, and there are also parades in Japan. It is celebrated in more countries than any other national holiday. On that day people wear shamrocks and green clothes or they dress up as leprechauns. Leprechauns are Irish fairies. Unlike most fairies they aren’t pretty. They look like an old man and are about 0.6096 meters (2 feet) tall. They have pointy ears and they are dressed in green. They guard the gold at the bottom of the rainbows. They spend their time making shoes or looking for gold. On Saint Patrick’s Day famous Irish landmarks are lit up in green. A part of the celebration in Ireland is drinking alcohol. People criticize Saint Patrick’s Day because it is over commercialized. There are also sports events on Saint Patrick’s Day.
No comments:
Email ThisBlogThis!Share to TwitterShare to FacebookShare to Pinterest
Labels: Holidays, informative, St. Patrick's Day 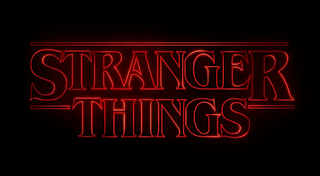 I have to write about a picture, and because this is a picture I’m gonna write about Stranger Things. I will try to tell the story from memory but definitely not chapter by chapter.

In the first season we are introduced to the main characters: Mike, Will, Lucas, Dustin and Eleven. At the start there is a laboratory where a monster escaped and killed a worker. After that we see the kids (except Eleven) are playing a card game, which has a name, I just don’t know it. Then they go home. On the way home most of the kids get home safely. But Will sees a strange figure in the distance and falls off the road. He runs home but nobody is home. Then he sees the figure from the window again, and then the lights start to flicker. He runs out to the garden where there is a tool shed and he grabs a gun. Then the lights flicker again and he disappears. The next day his mom and his brother realise that he is not home so they start searching for him. His mom (Joyce) goes to the police station where we are introduced to Jim Hopper, the chief of the police. First he doesn’t care that much because he says that kids usually disappear for 2 or 3 days, then come back home, but Joyce convinces him so they start searching for him. Meanwhile a girl appears in a restaurant and the owner gives her food. When he asks what her name is she shows a tattoo on her arm that says: ’011’. The owner calls, I don’t know, Child Protective Service or something and a woman comes there to the restaurant. He let’s her in and then she shoots him and two men come into the restaurant and start searching for Eleven. They find her so she snaps their necks with her telepathic powers and runs away. Mike, Lucas and Dustin go out to a forest to find Will. They don’t find Will, but they find Eleven. They bring her to Mike’s basement.

No comments:
Email ThisBlogThis!Share to TwitterShare to FacebookShare to Pinterest


Prophecy of the Dragonborn


When mistrule takes its place at the eight corners of the world
When the Brass Tower walks and Time is reshaped
When the thrice-blessed fail and the Red Tower trembles
When the Dragonborn Ruler loses his throne, and the White Tower falls
When the Snow Tower lies sundered, kingless, bleeding
The World-Eater wakes, and the Wheel turns upon the Last Dragonborn


Skyrim wreath on the brink of collapse. Let’s but now look west toward Helgen. Three carts full of prisoners approaching Helgen.
One of which is where our protagonist sits. His name is Nhovat and he’s a wood elf. Next to him there sits Ulfric Stormcloak the Jarl of Windhelm. He’s one of the most powerful Nord jarls.
- Do you heard about Ulfric Stormcloack murdered the High King Torygg - said a Stormcloak soldier.
- No – said Nhovat.
After one minute they arrived at Helgen.
- Who are they father? – asked a young Redguard boy to his father.
- Go to your room my son – said the father – now!
- Yes father.
On the other two carts there were a lot of stormcloak soldiers. And the notary began to say the name of the prisoners.
- Ulfric Stormcloak, the Jarl of Windhelm. Go to the block.
- Lokir of Rorikstead. Go to the block.
-  Ralof of Riverwood. Go to the block.
- Move forward prisoner. Captain what shall we do? He’s not ont he list.
- Forget the list notary. He go to the block
- Sorry prisoner I think we will meet in Sovngarde, but now go to the block.
Then there was a deep roar.
- What was that? – asked the executiner.
- Nothing – said the captain – General Tullius I request permission to commence execution.
- I give you the license. – said General Tullius.
A stormcloak soldier was execute before. When Lokir followed he ran away.
- Archers! – said the captain. Two archers aim the back of Lokir. Then they shoot.
- Come on, Nhovat! – said the notary.
She stepped onto the back of Nhovat and folded his head into the block. The executioner lifted his axe. Then the dragon appeard at the bastion and killed the executioner. Hadvar the notary run to help Nhovat.
- Come on prisoners, we don’t have time for idling.
Nhovat went into the bastion with Hardvar. He cut down Nhovat’s rope clamp. Our elf find an studded Imperial armor and a steel sword.
- Come let’s escape this place.
They’re went through the prison and they find three Stormcloaks. They sneak behind the enemy and kill them.
After prison there was the entrance to the wilderness.


- What’s your name prisoner? – said Hardvar.
-  Nhovat.
- So Nhovat go to Jarl Balgruuf the Greater, the jarl of Whiterun to get help to Skyrim’s dragon problem.
- But first go to Riverwood to my uncle Alvor.
Our protagonist started to walk but after a while he saw an Ancient Nordic barrow. This is important to know that in the deep of the Nordic barrows the Draugrs are burried. If someone wants approach the barrow he/she needs to carry weapons.
About fifteen minutes later Nhovat reached Riverwood. He spoke with a man and the man said, „Riverwood needs more guards, and asked the wood elf to go to the Jarl of Whiterun and ask for help.” When he arrived at Whiterun he turned left and started to walk to the Dragonsreach (the palace of Whiterun was built to capture a dragon, now the dragon’s skull is above the throne of Jarl Balgruuf.) Nhovat arrived to the Jarl and tell him abouut in Riverwood there’s not too many guards. Balruuf sent Nhovat to is mage, Farengar secret-fire.
- Well Nhovat – said Farengar – I have a mission for you.
- What’s that? asked Nhovat.
- You know that dragons are come back to our loved homeland. The mission is to recover the Dragonstone from Bleak Falls Barrow the ancient Nordic barrow.

No comments:
Email ThisBlogThis!Share to TwitterShare to FacebookShare to Pinterest
Labels: Stories

Unfortunately we don't play football like America, but I think it's because we can get hurt a lot,
but I think European football is better because this football is not as aggressive. But it is up to everyone to decide. I love football and basketball but I'm better at football

My favorite team is Real Madrid. They are a Spanish team. Their uniforms are white and blue. Their Biggest rival is Barcelona. My favorite player is Ronaldo because he is the best.

No comments:
Email ThisBlogThis!Share to TwitterShare to FacebookShare to Pinterest
Labels: informative

Christmas is in December. People celebrate Christmas because Jesus was born. People do different things to celebrate. some people spend time with their family. At Christmas I want phone.
No comments:
Email ThisBlogThis!Share to TwitterShare to FacebookShare to Pinterest
Labels: Holidays
Older Posts Home
Subscribe to: Posts (Atom)